...in no particular order of importance 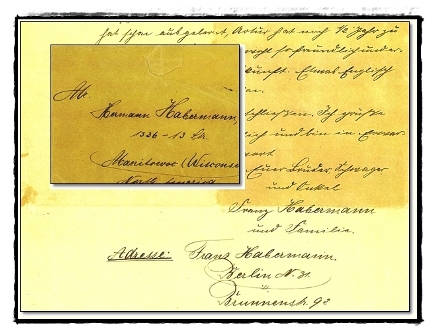 This letter was written by Franz Haberman in 1920 from Berlin Germany just after the end of the first World War. It is addressed to his brother Hermann Habermann (Father of "Papa"Frank Haberman) in Manitowoc Wisconsin. In it Franz describes to Hermann the hardships he and his Family have undergone as a result of the war in Germany. Franz goes on to give a count of the Family who are either still living, working abroad or who are now dead. He asks his brother Hermann to describe the conditions in America to him and to also give a count of his Family. Franz, who has not heard from the Manitowoc Haberman's since 1905 does not realize that his brother Hermann has passed away eight years earlier in March of 1912. Franz would later establish contact with Artur Haberman (Hermann's oldest son) in 1929.

Click on the photo to see the entire transcribed letter 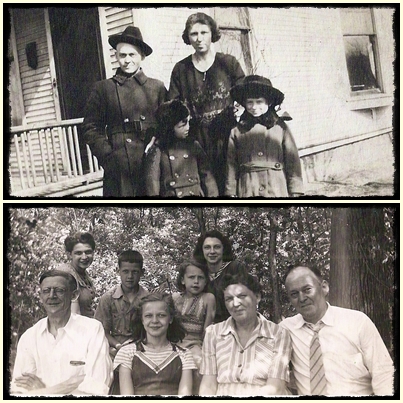 These Photographs are from My Moms sister, Faith. Until now the only photo of Harry Landgren Sr was one that I had that was so small and blurred that it was impossible to make out any features of the man. Harry Sr is now revealed. The top photo (circa 1925) is of Harry and Henrietta Landgren with their two children Harry Jr (My mothers father) and May. May Landgren was tragically killed in 1931 in a motorcycle crash at the age of 18. The bottom photo is (top) Ruth, Edward, Nancy and Jean Haberman; (bottom) Frank Haberman, Marion Haberman, Henrietta Landgren (nee Bouwman) and Harry Landgren Sr. 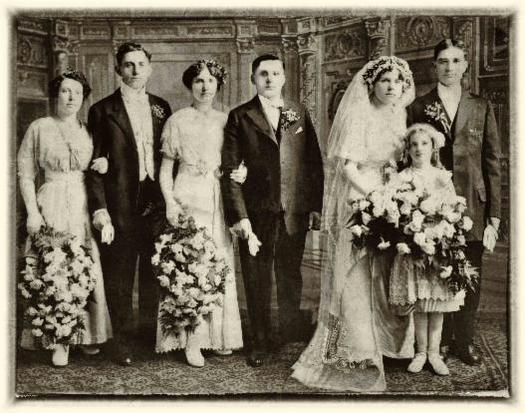 This Photograph was sent to me by Andrew Florczak's daughter who is still going stong at 89 years old and living in Chicago with her husband. Andrew Florczak was my great grandfather's brother who came to america in 1910 and later married Anna Ferencz in 1914 at St. Johns Cantius Chuch in Chicago Illinois. Like his siblings, Piotr, Jozef and Josephine, Andrew was born in Wilkowyja Poland and baptised in the village of Imielno where the local parish was. I like the photo not only because of the tie to the Florczak line but because it was sent to me by Andrew's daughter and who I now consider part of my Family. I initially wrote to her in late 2010 and she called me the very day she received my letter and was very interested to hear about the research I had been doing. We now keep in touch via phone and letter regularly. She sent this 1914 wedding photo of her Mom and Dad to me, the original no less, a few weeks later.

A Nice Poem About "Hugs" from Nani's Notebook

In her later years, Nani (Frances Florczak), started to put together some thoughts, notes and final wishes into a small notebook. In it there are a number of her favorite short prayers and poems. I liked this one just because it makes me think of all the great big hugs she always had for me whenever I saw her. This poem about hugs is not an original from Nani but she obviously liked it enough to take the time to write it down in her notebook.

Have a read and then go out there and give someone you love a Big Hug :)

Born and raised in Wisconsin, Harlan D Stone honorably served the local communities as Preacher, Township clerk and Register of Deeds for more than 30 years. Click on the photo for details. 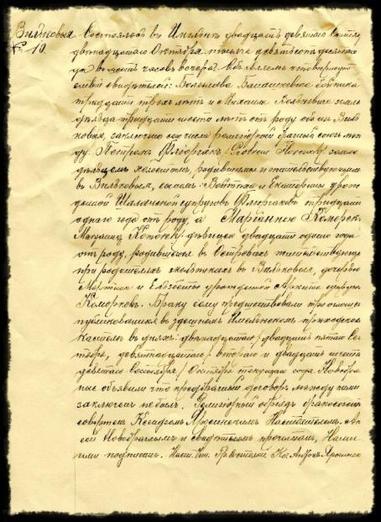 I wrote to the State archives in Lodz Poland requesting the marrige record of Piotr and Marjanna. I did not have a high degree of confidence that anything would actually still be on file, ..it was. The marriage document is written in the now defunct language of Russian cyrillic. The document has been roughly translated (not by me of course) as follows. Click on the photo for the translation.

Who's the stiff in the funny hat? 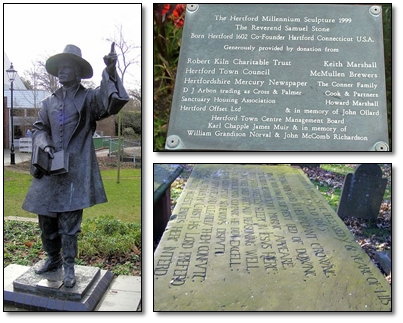 Why it's the Reverend Samuel Stone, my 11th great Grandfather. This statue, which stands near the Ancient burial grounds in the city of Hartford CT , commemorates the Reverend's effort to assist in establishing the city. Click on the Reverend for more details. 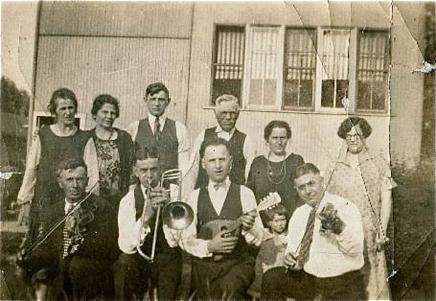 A real classic picture here. This photo is from the collection Of Mary Chmura Heindl (Daughter of Frank and Julia). Frank (My great Grandfather) is shown playing the trombone along side of his brothers John (left violin), Stanley (mandolin) and Joseph (violin far right) The folks standing behind them remain a mystery but may be the wives of "the Amazing Chmura Brothers" quartet. This photo must be from the early to mid 1920's as Frank died in 1926.

Link to the Web page "Florczakowie"

I found this web page though one of a few hundred various "google" searches of the surname Florczak. In the site there is an entry in their forum from a Ryszard "Richard" Florczak looking for family members from the town of Imielno and Wilkowyja. In his entry he names his grandfather as Jozef Florczak born in 1874 to Wojciech Florczak and Katarzyna Szalanska. What a coincedence, Piotr's parents names are Wojciech and Katarzyna and they from the same village ...we've got a match! I tried to post a response in the forum however it has been offline for about a year now and the email address that Ryszard gives is now invalid. I figure Ryszard is about 70-75 years old by now and still living in Poland. I contacted the administrator of the site and she was kind enough to re-open the forum and post a message for me. Anyone with information to the whereabouts of a Richard Florczak living in Poland please contact me, ...that should not be too difficult, right?

Follow the link below and click on "ksiega gosci" (Guestbook) to view the forum ..better brush up on your Polish first.

The Chmura Brothers Journey of 1895 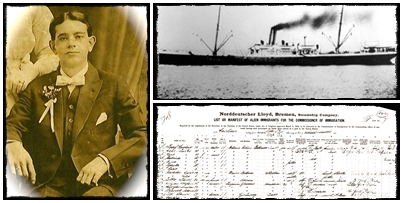 My Great Grandfather, Frank was born Franciszek Chmura in November of 1888 in Sieradza Poland to Maciej and Maryanna Chmura.
As a young boy, Frank lived his early years in Sieradza Poland (Near Zabno) with his mother and his three brothers Jan, Jozef and Stanislaw and two sisters Helena and Salomea (Sarah).
In 1895 at the age of 6, his mother Maryanna, put him, along with two of his brothers, Jozef and Stanislaw on a ship to America where his Father, Maciej (Matthew in English) had already living and working since the early 1890's in the city of Chicago.
Franks ship mate, guardian and older brother, Jozef (Joseph) was just 5 years older than him at the time they set sail to America while his younger brother, Stanislaw (Stanley), was all of just 3 years of age.
The log book of the German built ship, “The Aachen” does not give any indication that the Chmura brothers had any assistance in their long journey from Bremen, Germany to the Port of Baltimore.
The log entry of “The Aachen” simply indicates that the boys’ passage was paid by their “mother” and that they were traveling to a final destination in Chicago, where their “father” was to meet them. Once arriving at Baltimore Harbor, the Chmura brothers would have still needed to make their way another 700 miles to their final destination and new home town of Chicago.